The Fellows Go To Washington D.C.! 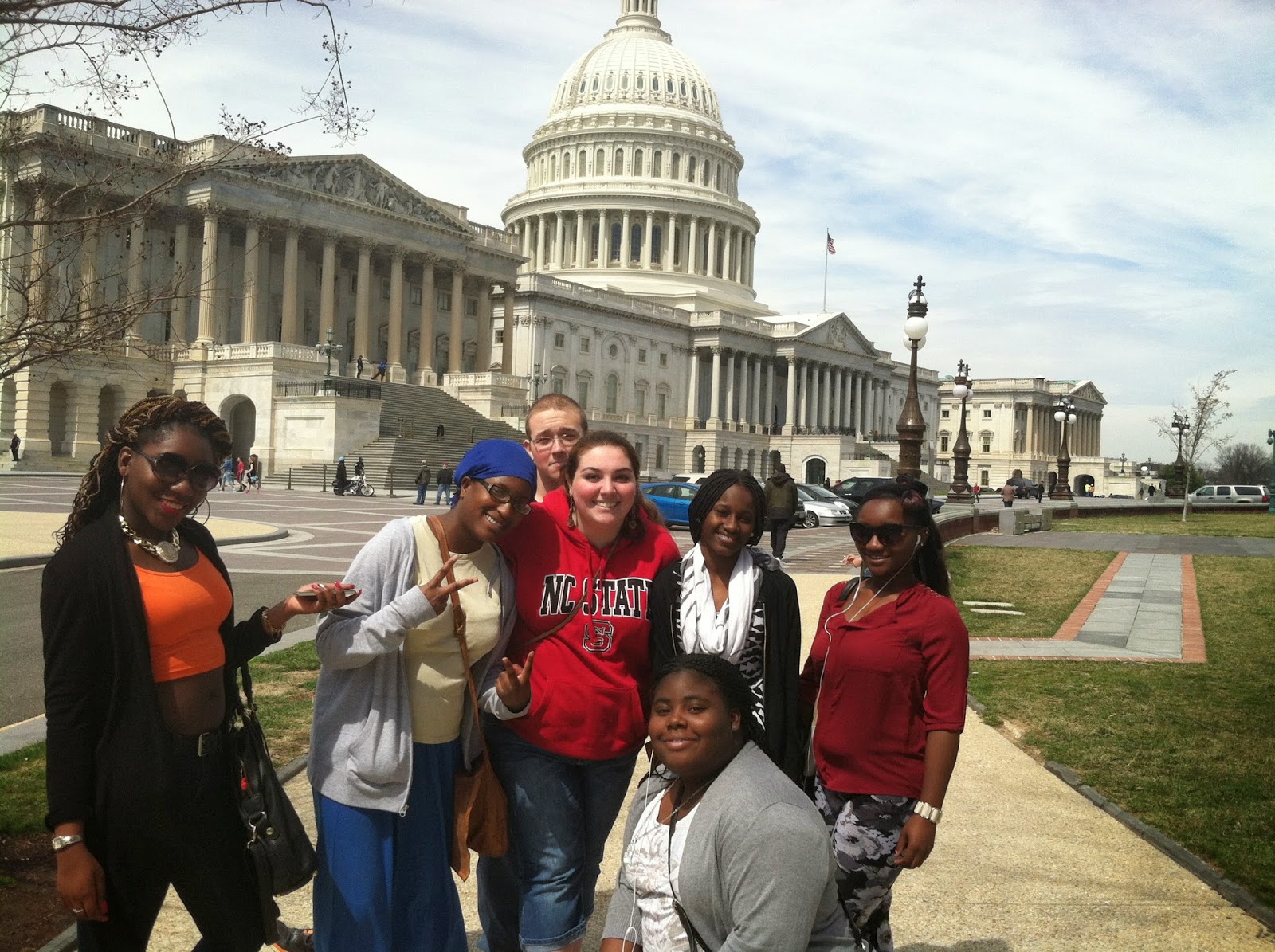 During Spring Break, the junior fellows had the wonderful opportunity to travel to Washington D.C. for a weeklong visit.  For many of them, this was their first trip to our nation’s capital.  Here are some of the highlights of the visit:

We toured three museums in the Smithsonian Institution.  The National Museum of History had great exhibits on ancient life forms and cultural artifacts like the famous Hope Diamond.  We watched an IMAX at the Air and Space Museum that presented an unprecedented window seat on board a space shuttle.   Finally, at the American History Museum, the fellows really enjoyed the Changing America exhibit that commemorated the Emancipation Proclamation and the March on Washington in 1963. 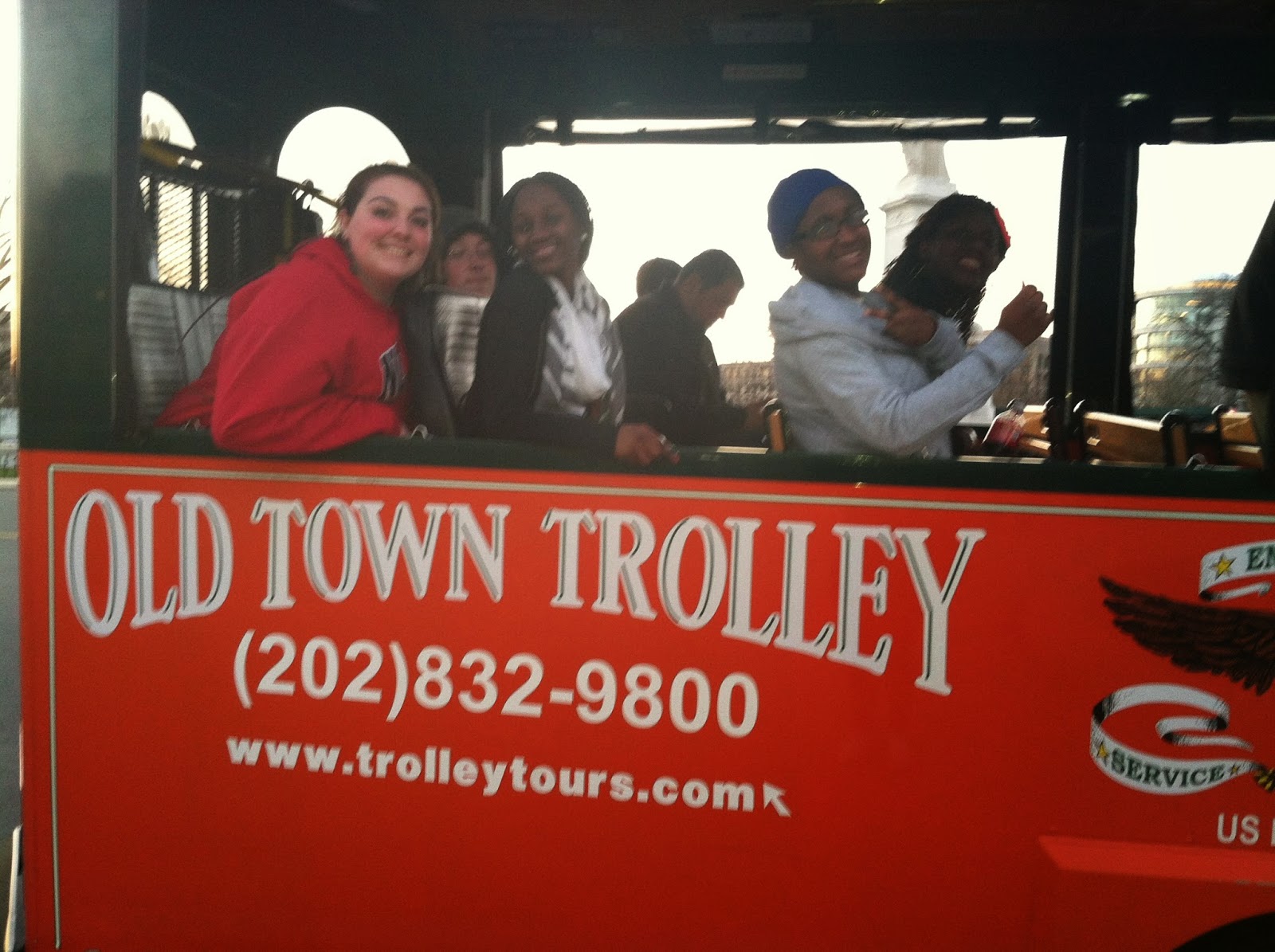 We had a fantastic time touring the Monuments on a moonlight tour aboard an Old Town Trolley.  We stopped at the Lincoln, Vietnam, Iwo Jima, FDR, and Martin Luther King Memorial.  We also heard historical tales and anecdotes about the fascinating history of Washing D.C. 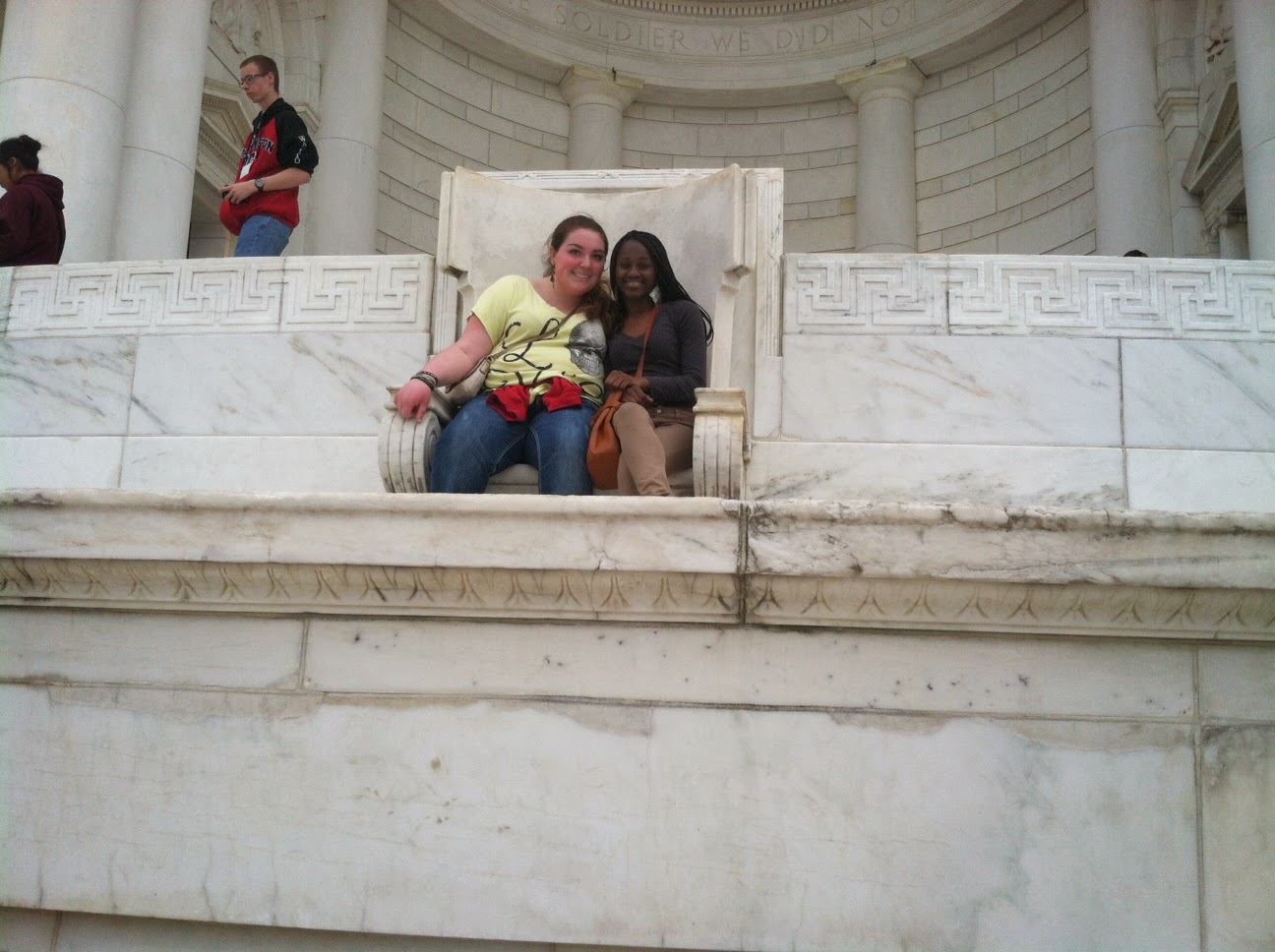 We visited Arlington National Cemetery and saw the Robert F. Kennedy Gravesite and Tomb of the Unknown Soldier.  The fellows especially enjoyed the Changing of the Guard ritual and gazing out at the impressive landscape, which serves as a tribute to the service of those laid to rest there. 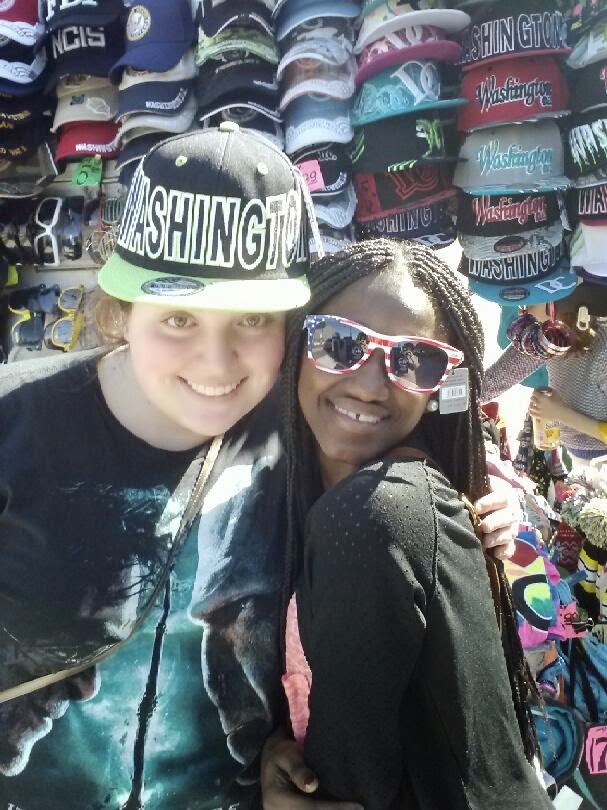 We had the chance to visit the Kennedy Center and see an amazing performance called Liner Notes.  Vocalists and a jazz trio combined for a unique multimedia experience to present the history of hip-hop throughout the decades. 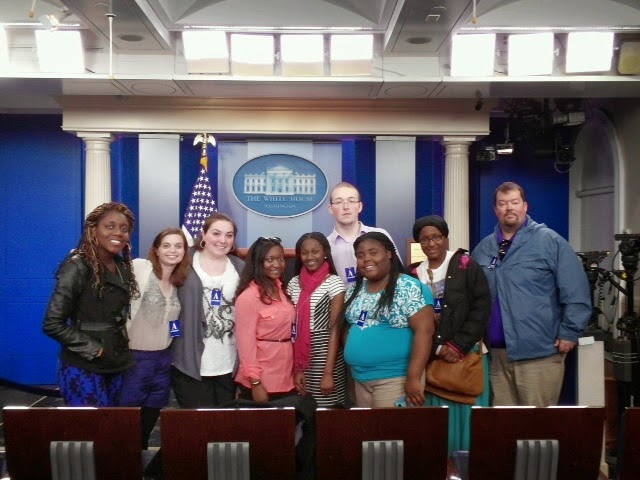 Finally, we had the exceptional opportunity to visit all three braches of the government.  We took a tour of the Capital, attended a lecture at the Supreme Court, and visited the White House.  The highlight of the trip was our visit to the White House.  We were very lucky to participate in a round table discussion with members of the Obama administration who worked closely with Elizabeth Edwards and on the Edwards campaign.  We learned all about life in the White House, and had an incredible tour of the West Wing, including the Oval Office and the Press Corps Room.  We also were given presidential M&M’s and Hershey Kisses, which the fellows were very excited to receive. 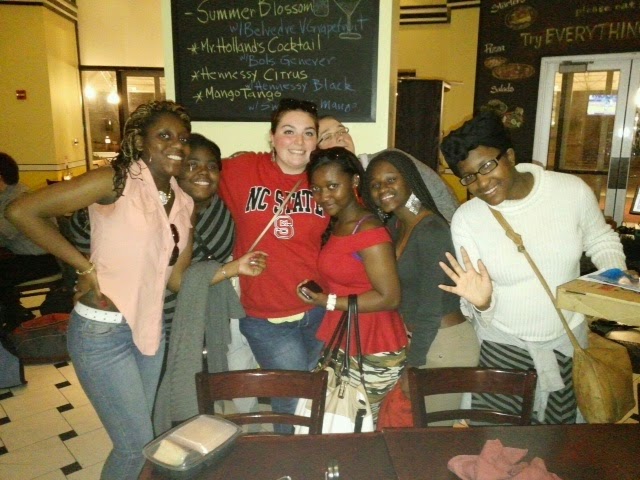 Overall, everyone had a wonderful time on the trip.  The fellows learned so much about our nation’s history and political systems.  Whether it’s a career in politics or keeping educated about governmental policies and current events, the fellows learned the importance of being active, and engaged citizens.

Posted by The Elizabeth Edwards Foundation at 8:20 AM No comments:

March Mentor of the Month! 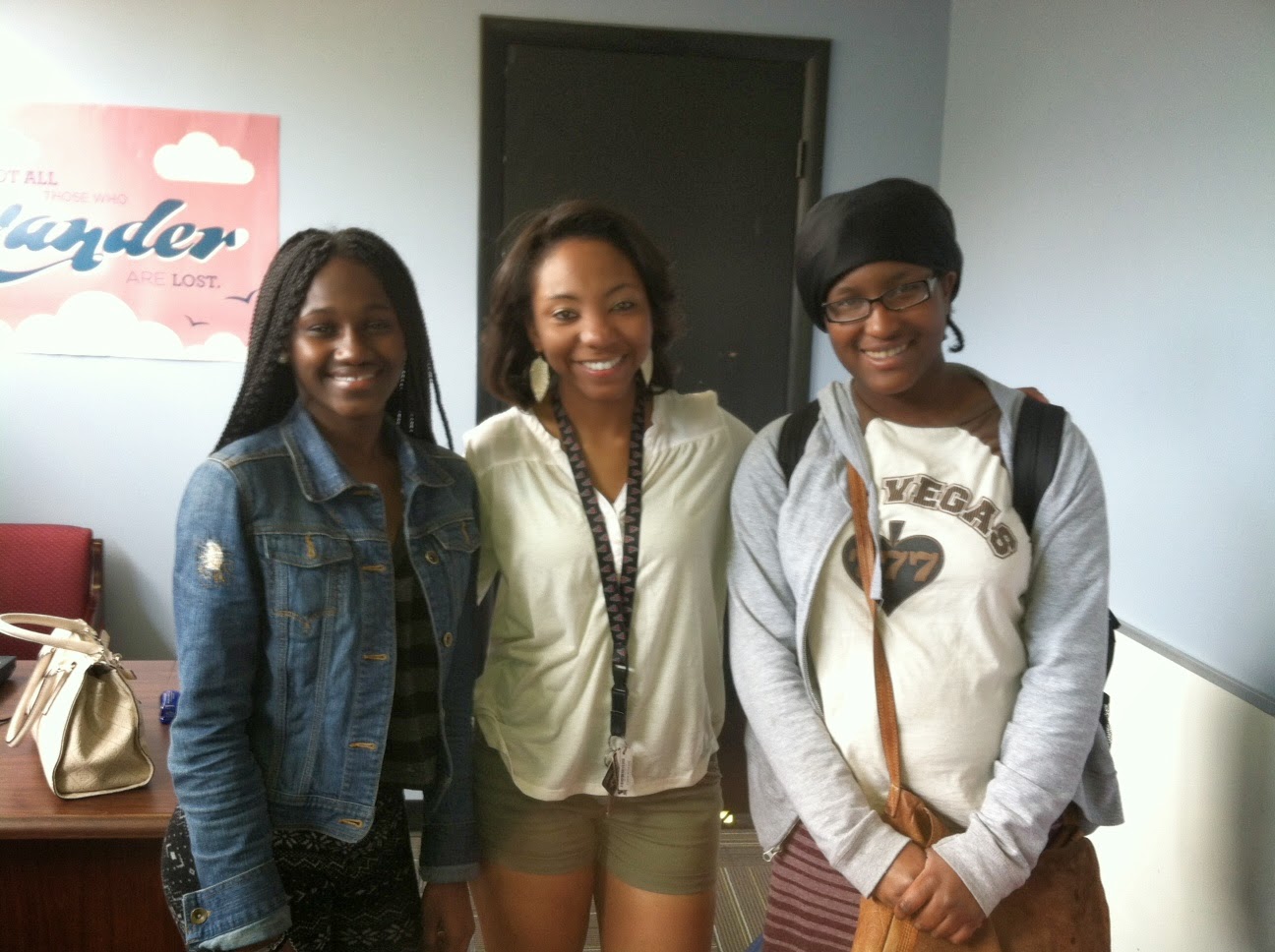 Sha’Michael Lilly is in her second year of mentoring two fellows, Cynthia Lee and Albertine Voza.  Sha’Michael is a junior at NC State University studying Social Work.  She has really enjoyed getting to know each of her fellows on a more personal level.  While her fellows are both very different from one another, she really admires their focus and drive when it comes to getting a good education.

During her first year of mentoring, Sha’Michael was able to bring her fellows to two of her classes on campus. This was a great opportunity for them to ask various questions about college life and get a firsthand experience of what it feels like to be a college student.  The fellows also really enjoy their discussions with Sha’Michael and like how kind and understanding she is.  They especially appreciate how Sha’Michael helps them to set up their goals and make the right choices in life.

Overall, Sha’Micahel has really enjoyed exposing her fellows to the college lifestyle, which is something she was never able to experience as a high school student.  She realizes that many young people may lack stability and inspiration, or anyone to look up to. Mentoring programs can serve as the connecting factor between youth who may feel lost or broken and adults who want to inspire and build them up.
Posted by The Elizabeth Edwards Foundation at 7:53 AM No comments: